In line with Welsh Government regulations

St Davids Cathedral is open for visitors from 10am to 5pm Monday to Saturday, and 1pm to 5pm on Sundays
We have daily services see here
In accordance with Welsh Government legislation, all adult visitors must fill in a Track and Trace form when they arrive.
During busy times please be aware you could be asked to wait before you are allowed entry into the Cathedral.
Everyone entering the Cathedral must wear face-masks, unless they can show an exemption certificate or other authorisation.
Evening Prayer is daily at 6pm
Sunday Eucharists or Mattins at 8:30am and 11:15am, Sunday Evening Prayer at 6:00pm
The choir are now on Summer holidays, no choral services until September

On 29th December 1170 Archbishop Thomas Becket was murdered during Vespers in Canterbury Cathedral, by four knights in the retinue of King Henry II. The world of medieval Christendom was shocked at the brutal and public act against an Archbishop. Canterbury Cathedral was closed. The Pope, Alexander III, soon excommunicated the knights. The papal punishment of the King was effectively done by negotiation on the exact terms of his penance over the next 18 months.

The Norman King Henry II was at home in France when Becket was murdered. Within a year, he travelled to Ireland and on the way came to St David’s shrine [Menevia / Mynyw] on pilgrimage. King Henry II’s pilgrimage to St Davids shrine may have been part of this process of penance. Pilgrimages to St David’s shrine were recognised by the Pope as well as in Henry’s native France. In fact, two pilgrimages to St Davids were recognised as equal to one to Rome. So when Henry also visited St Davids on his way back from Ireland the following year, was he accumulating the equivalent penance points as travelling to Rome?

The medieval Welsh annals, Brut y Tywysogion / Chronicles of the Princes reported that:

“The king had gone to Menevia on a pilgrimage; and in Menevia the king made an offering of two choral caps of velvet, intended for the singers in serving God and St David, and he also offered a handful of silver about ten shillings. Then David, son of Gerald, who at the time was bishop of Menevia besought the king to eat with him on that day“. 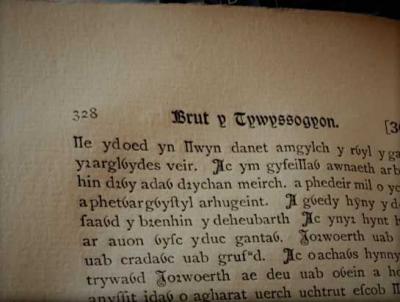 A digital copy of this exact reference from the original of Brut y Tywosogion is on display in the St Davids Cathedral Treasury during the summer of 2021. We are grateful to the National Library of Wales for permission to use this digital copy.

Also on display is a copy from the Cathedral Library Collection of the Red Book of Hergest. In medieval Welsh is the same section  in this version of Brut y Tywysogion / Chronicles of the Princes. In the old Welsh. St Davids is called Mynyw or Vynyw.

Also on display is a digital copy of part of the music from the St David Office in the medieval Penpont Antiphon.

This is the sort of monastic style chant singing that Thomas Becket and Henry II would have been used to hearing in Cathedrals, abbeys and monasteries. It is probable that this was sung, or chanted, by “the singers in serving God and St David” when Henry II visited St Davids Cathedral in 1171.