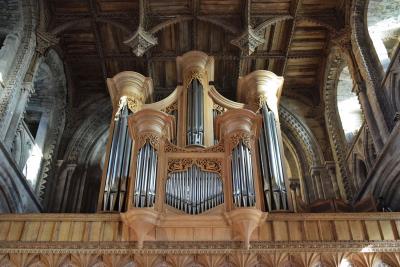 The cathedral’s organ was built by Henry Willis in 1883, and had three manuals and thirty-one stops. It was rebuilt by Hill, Norman and Beard in 1953, when no significant tonal alterations were made, but the instrument was housed in a new case by the architect Alban Caroe. This was smaller than the previous ‘pipe-rack’ by Willis, which meant that almost the entire pedal organ had to be moved off the screen to a new enclosure in the South Transept. This created enormous problems of balance, with these pipes too loud in the quire and not loud enough in the Nave. Further work took place by Rushworth & Dreaper in 1980, and Percy Daniel & Co in 1986 and 1989.

The organ was dismantled in September 1998 and underwent a major restoration and rebuild by Harrison & Harrison of Durham between 1998 and 2000. A new case of limed oak ( incorporating parts of the old east case) once again houses almost the entire pedal organ on screen, the Willis Choir removed in 1980 was re- instated, and with a few other additions in the style of Father Willis, the new organ now has four manuals and fifty-four stops. The specification may be viewed at the web-site of Harrison & Harrison.

The new instrument was dedicated by the Bishop of St Davids at Choral Mattins on Sunday 15 October 2000, and the inaugural recital was given by Dr Roy Massey MBE, organist of Hereford Cathedral, on Wednesday 15