St Davids Cathedral is a fantastic place to explore history, spirituality, art and architecture. This tour will show you some of the building's highlights. 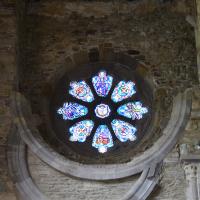 The Cathedral building has changed over time to meet new needs and styles. Here, in the south-west nave corner, you can see the round 'rose' window has three different frames from different stages of the Cathedral’s history.

The lowest blocked frame dates to the twelfth century. In the 14th century, Bishop Gower wanted to let more light inside and had larger windows built, which can be seen in the larger curved frame. Gilbert Scott’s 19th century renovation preserved the window’s history. It is now filled with 20th-century stained glass by the William Morris Company. 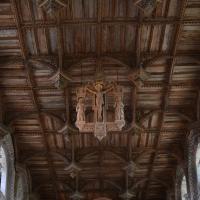 Above your head is the unique wooden nave ceiling. This was made in the 1530s from Welsh oak and is a carved masterpiece.

With its rich decoration, it is the only cathedral ceiling of its kind in Britain. It mostly consists of oak panels, below which hang twenty-two ornate carved pendants, each 1.5 metres in height and just over 1 metre wide. The sides and corners of the nave roof are also adorned with half- and quarter-pendants. 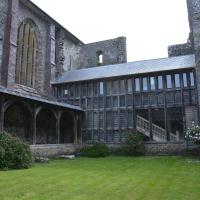 This area once housed St Mary's College, founded in 1365 by Bishop Houghton. It housed a master and seven fellows, who served the Cathedral.

The Cloisters were rebuilt in 2008 (look for the traces of the old above the new) and the complex serves the Cathedral's needs today in the spirit of its founder. Here you can find the Refectory with Cloisters Gallery, toilets and the Song School for the Cathedral Choir. 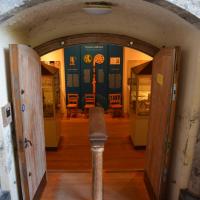 The Cathedral Treasury opened in Spring 2006 to provide a safe home for treasures which tell the story of Christian worship and scholarship at St Davids that began 1,500 years ago and which continues to the present day.

The three categories assigned to the 'treasures' housed here are Treasures of the Bishops, Treasures of Worship, and Treasures of Scholarship. The bishops treasures include a variety of objects, reflecting the power and status of the Bishops of St Davids, which were discovered in the Cathedral graves of four early Bishops. Treasures of Worship include a small silver chalice made in 1618 of the sort of simple design popular in the Elizabethan period, and a silver plate for a communion set made in 1678 - on the rim of which is inscribed Ecclesis Cathedralis Menevensis. The Library contains some truly remarkable treasures of Scholarship. Some of these are on show in the Treasury and you can see many more if you visit the Library where the oldest book dates back to 1505. 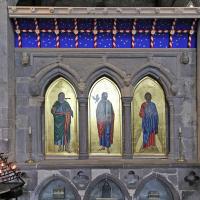 In the twelfth century Pope Calixtus II declared St Davids Cathedral to be a place of pilgrimage. It was at this time that the medieval shrine was constructed and situated in the presbytery, close to the High Altar. Pope Calixtus II also stated that the shrine was so important that two pilgrimages to St Davids were equivalent to one to Rome, three were equivalent to one to Jerusalem.

Since then the path of pilgrimage has been trodden by hundreds of thousands of individuals. The destruction of the Shrine during the reformation caused a steep decline in this important religious practice; however, throughout the periods of religious and political turmoil pilgrims have continued to visit the site. 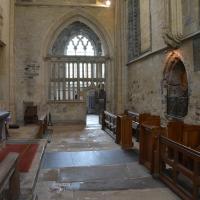 In 1509, Bishop Vaughan built Holy Trinity Chapel, apparently infilling an open space at the east end of the 12th-century cathedral.

In its exquisite fan-vaulted ceiling he placed his crest with that of King Henry VII. The altar and its reredos were pieced together in the 1920s from beautiful medieval fragments found during restoration work. The Latin text reads “Behold the Lamb of God who takes away the sins of the world”. 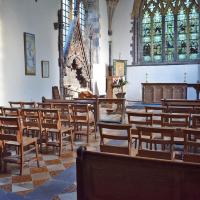 This 14th-century chapel, built to honour the Virgin Mary, has been reworked many times.

Remodelled by Bishop Vaughan in the 1500s, he kept the 14th-century stone seats (sedilia) and earlier tombs, but his vaulted ceiling fell in 1775, probably because the lead had been stripped in 1648.

The cathedral’s Welsh congregation meet in the lady chapel for Sunday worship. 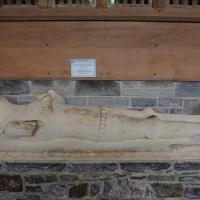 The Cathedral contains the tombs of many important figures in Welsh history including the reputed tomb of the Welsh prince, Lord Rhys ap Gruffydd, Arglwydd Rhys.

During the Norman Conquest period he restored the medieval kingdom of Deheubarth and was called 'Prince of Wales'. He united poets and musicians from across Wales for the first National Eisteddfod of 1176. The ornately-carved tomb dates from the 14th century, some two hundred years after his death.

This is the quire. Above you is the painted 19th-century tower ceiling and by the altar are rare surviving medieval floor tiles. St Davids is unique in having a royal quire stall sitting alongside members of Chapter. The hinged seats in the stalls have carved ledges to lean upon called misericords. These lively carvings include a dragon, an owl, and pilgrims being seasick over the side of a boat!

The choir stalls were constructed in the late 15th to early 16th century. They feature the flip-up seats called misericords, literally ‘mercy seats’. These seats have a ledge on which those in the choir could unobtrusively rest whilst remaining standing as was required through the long sung services of the medieval period. The underside of the misericord seats reveals fine 16th century carvings. Many of these feature scenes from moralistic tales as well as fantastic beasts and very basic toilet humour! The "Green Man" is a common medieval motif. It is thought to be a way of showing how the wild, natural world (a place of demons and fear in this period) could be brought inside the church and made safe.

The surviving medieval floor tiles bear the coats of arms the nobility. Coats of arms are also painted on some of the backs of the stalls and at the end of benches. Some of these are the arms of the families associated with the canons and their estates, others are the arms of families who supported the cathedral financially by paying for building work or funding a priest who would then say masses for the soul of the donor and their family after death and thereby speed their journey to heaven. 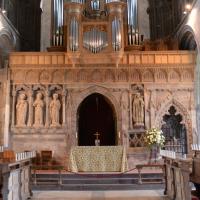 This elaborate Gothic screen was erected by Bishop Gower in the 1340s. It houses his tomb. Look closely and you will see it is decorated with tiny human heads!

On the screen stands the organ, rebuilt in 2000. On the north side is Thomas Tomkins’ memorial (died 1656), the great Tudor composer. Born in St Davids, Thomas was a chorister here and his music is still used in the Cathedral.

The cathedral’s organ was built by Henry Willis in 1883 and had three manuals and thirty-one stops.  It was rebuilt and restored several times until its major resotration between 1998-2000. It was then dedicated by the Bishop of St Davids at Choral Mattins on Sunday 15 October 2000. The inaugural recital was given by Dr Roy Massey MBE, organist of Hereford Cathedral, on Wednesday 15.

The figures on the screen are of modern date, including the statue of St David.

The screen is embellished with an open four-leaf flower and wave and pellet mouldings. This is an example of the Decorated style typically found in buildings associated with Gower.

The earliest record of an organ existing within St David’s comes from an anonymous Welsh poet in the fourteenth century.