Our Services continue as planned, with 2m distancing from Boxing Day, in line with Welsh Government requirements.

The Candlemas Service date has changed to January 30th at 6pm.

Please remember to bring your face-covering, if you are coming to the Cathedral for services, general visiting or other events (unless you are exempt).
We would be grateful if you could also take an LFT before visiting us to keep others safe.

Address at the Service of Evensong, with Commemoration of His Royal Highness the Duke of Edinburgh 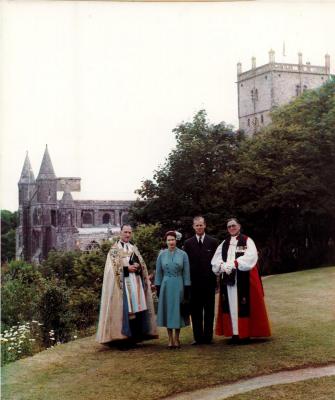 Address at the Service of Evensong, with Commemoration of

His Royal Highness the Duke of Edinburgh

Addressing the General Dental Council in 1960, the Duke of Edinburgh proudly announced he had invented a new word, dontopedalogy, which, he said, ‘is the science of opening your mouth and putting your foot in it, a science which I have practiced for many years.’

His words, not mine – which serve to illustrate that whatever else, Prince Philip was never boring and had found a way to be true to himself, his strong character, modernizing spirit, and sharp wit in his demanding public role, while bringing some spice into Royal life. That said, as the Prince of Wales fully acknowledged while paying tribute after his father’s death, he was never one to suffer fools gladly.

In 1993 I saw something of this at close hand. As a member of Her Majesty’s Diplomatic Service, posted to the British Embassy in Budapest, I helped coordinate the State Visit to Hungary, made by the Queen and the Duke of Edinburgh. Thank you, Lord-Lieutenant, Bishop Joanna, for the opportunity to share some memories of that time, which reflect much of what has been said in the media this week.

One recurrent phrase has been that ‘he wore the trousers so she might wear the crown’. Before the State Visit, there was endless correspondence between embassy and palace, and revised programmes flew back and forth. At one point, Prince Philip was away – carriage driving, if I remember correctly – and it was made clear that no decisions could be taken until he had returned. His judgement was trusted on what was feasible and appropriate, and he was happy to be tough cop, if he thought too much was being asked of the Queen.

Over the 4 days of the visit itself, it was fascinating to watch the years of professionalism and team-work, deployed to effortless effect. From the moment they left the guest house, until they returned, they were on show, and acted to give the best possible experience to everyone they encountered. My job was to be the advance guard, and check all was as expected at each venue. Then I’d watch the cavalcade arrive. Each time, the private secretary would materialise at the Queen’s side as she stepped out of the car, and introduce the principal host, who would usher her forward. Meanwhile, on the other side of the car, the Duke would be unfolding his tall frame, quipping with the man who held the door, and waving at the crowd, before striding round to be presented to his own host for the event. There’d be a touch of conversation, and by the time the two of them moved on, with everyone else waiting to follow behind, the Queen would already be two or three metres ahead. Imperceptibly, he’d engineered it so everyone had a really good clear view of her – which is of course what they were most wanting!

The Queen and Prince Philip also had a wonderful capacity to work a reception, entirely separately and seemingly independently, with a choreography that ensured everyone had the chance to meet them. The Duke seemed genuinely interested in everybody he met. And if loud laughter erupted anywhere in the room, you could guarantee he was at the heart of it. Finally, without apparently looking at watches, private secretaries, or each other, Queen and Consort would rendezvous near the exit, just at the point when farewells had to be said, and then depart perfectly on time.

Perhaps it was his military background, but the Duke was an absolute stickler for punctuality. No matter how much fun a particular event was, as far as he was concerned, they owed it to those awaiting them at the next event, to arrive on time. It was their duty. Much has been said about the Duke and duty, undertaking over 22,000 solo engagements above those accompanying the Queen, and holding over 800 presidencies and patronages, of which the Duke of Edinburgh Award has rightly been highlighted. So it is appropriate our prayers today are led by pupils of Ysgol Penrhyn Dewi who are embarked on the scheme.

The Princess Royal said this week ‘My father has been my teacher, my supporter and my critic, but mostly it is his example of a life well lived and service freely given that I most wanted to emulate …’ So back to service and duty. Some commentators have emphasised the legacy of Socrates, in Stoicism and the Stoic life, for teaching that doing one’s duty is the path to self-fulfilment.

But I’d like to look to a different, and greater, source, when considering this man whose extensive library was said to have been dominated by books on two subjects – ornithology, and theology. I know from clergy friends who had the terrifying experience of being invited to spend a weekend at Sandringham, and preach at Sunday Mattins, that he liked few things better than to grill the cleric afterwards on all they had asserted, with considerable theological knowledge. After all, the motto accompanying his coat of arms was God is My Help.

It is only a fortnight since we recalled Jesus at the Last Supper, telling his disciples ‘greater love hath no man than to lay down his life for his friend.’ We can never truly know another’s motivations, but, since before most of us were born, the Duke of Edinburgh persistently gave the clear appearance of laying down his life for – well, who knows – for this country and the Commonwealth, for the concept of crown, for the person of the monarch, or, perhaps most of all, for the woman whose face still lit up whenever he was there, even after 73 years of marriage.

She, our Queen, his wife – who, on their Golden Wedding, called him her strength and stay – she above everyone else is in our prayers at this time. May she and all who mourn, know the consolation of the promises of God in Jesus Christ, who conquered death and rose victorious from the grave. May they and we know in our hearts, and finally come to experience that, as our second reading put it, that the home of God is among mortals; and that one day, he will wipe every tear from their eyes; and death will be no more; mourning and crying and pain will be no more.’

And until that time comes for ourselves, may we also emulate life well-lived and service freely given, and follow all that epitomises the example of our first reading, of those over whom the Lord will reign for ever.

For those who trust in him will understand truth,

and the faithful will abide with him in love,

because grace and mercy are upon his holy ones, and he watches over his elect.

May the Lord watch over, not so much Prince or Duke, but the man himself, Philip Mountbatten, and may he rest in peace, and rise in glory.