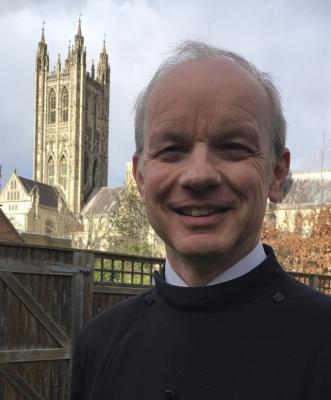 The Dean of St Davids, the Very Revd Dr Sarah Rowland Jones, is delighted to announce the appointment of Mr Christopher Crooks as the next Dean’s Verger, to lead the vergers’ department at St Davids Cathedral.

Chris Crooks comes to St Davids from Canterbury Cathedral, where he has been ‘Vesturer and Sacrist’ since 2005, an equivalent post in a rather larger setting. There, he has overseen practical, liturgical and processional arrangements for major services and events from the enthronement of the Archbishop of Canterbury to special services attended by members of the Royal Family, and from gatherings of the Primates of the Anglican Communion from across the world through to small family funerals to say farewell to loved ones, and everything in between. Under his leadership, his team is also responsible for preparing the Cathedral for the regular rhythm of daily services, as well as opening the Cathedral to visitors and pilgrims, and overseeing the wide range of other activities they host. He has previously worked as Head Verger at Salisbury and Portsmouth Cathedrals, and as a Verger in Wells and Llandaff Cathedrals, though originally hails from Skewen, in the County Borough of Neath Port Talbot.

Dean Sarah said ‘I am delighted that Chris will return to Wales, bringing his great wealth of experience to the service of the Cathedral of our Patron Saint. I am sure he will be able to contribute significantly as we begin to emerge from Covid-19, and also prepare in 2023 to celebrate the 900th anniversary of the decree of Pope Callixtus II that ‘two pilgrimages to St Davids are equal to one to Rome.’ She added, ‘We are looking forward to having him on the team as we step forward into new opportunities ahead.’

Chris Crooks said ‘It is a huge joy to be joining the team at St Davids at such an exciting time, and to be able to build on the good work of my predecessors who have cared for this holy place in their turn. It is a truly special place, known and loved across the world, and to play my part in its daily life, and to live within the community of Tyddewi and the Close, will be a very special privilege.’

He will join the Cathedral team in late May, in time for the St Davids Cathedral Festival, which returns after two years of cancellation with a broad, exciting, programme. Chris and his wife, Debbie Caton Crooks, have four children and two cats. Among his interests, Chris enjoys reading (especially history), family history, exploring Pembrokeshire, and time with his family.

This appointment follows the retirement of Mrs Jenny Kitchell, who has been Dean’s Verger since January 2020, having previously held other positions in the verging department.