ST DAVIDS CATHEDRAL IS CURRENTLY ONLY OPEN FOR PRAYER AND PRIVATE REFLECTION UNTIL FURTHER NOTICE
WE ARE NOT OPEN FOR GENERAL VISITING, in line with Welsh Government regulations
We are open Wed-Sat for prayer and reflection: 10am - 3pm. Our Sunday Eucharist at 11.15am will be streamed and available via Facebook and Youtube.
Everyone entering the Cathedral must wear face-masks, unless exempt

History was made on 2nd November 2016 as the Church in Wales elected its first woman bishop.

Canon Joanna Penberthy was elected as the 129th Bishop of St Davids having secured the necessary two-thirds majority vote from members of the Electoral College which had been meeting behind locked doors at St Davids Cathedral since Tuesday morning.

The announcement was made by the Archbishop of Wales as the west door was opened on Wednesday at 1pm.

Canon Joanna, 56, was one of the first women to be ordained as a priest in Wales in 1997 and is currently Rector of Glan Ithon, in the Diocese of Swansea and Brecon in Llandrindod Wells.

She is the first woman to be elected as a bishop following the decision of the Church’s Governing Body in September 2013 to enable women’s ordination to the episcopate. 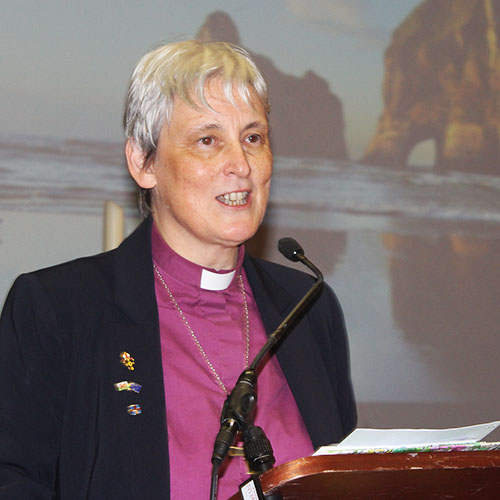