Dean Sarah grew up in Welshpool and Shrewsbury. After reading Maths at Cambridge University, she joined the diplomatic service, and in the following 15 years had postings in the British Embassies in Jordan and Hungary. Responsibilities during London postings at the Foreign Office included energy policy, counter-terrorism and dealing with the European Union.

While in Budapest, she was made a Lieutenant of the Victorian Order (LVO) for her role in organising the Queen’s state visit to Hungary in 1993. She left the service in 1996 to pursue her Christian vocation and was awarded the OBE for services to the Foreign & Commonwealth Office in January 1997.

Dean Sarah trained for the priesthood at St John’s College, Nottingham, after 15 years as a British diplomat. She was ordained in 1999 and served initially in Wrexham, in her home diocese of St Asaph.

In 2002, she moved to South Africa to marry the Rt Revd Justus Marcus, regional Bishop in the Diocese of Cape Town and formerly Dean of Kimberley Cathedral, whom she met when they were both appointed to the Inter Anglican Standing Commission on Ecumenical Relations. She continues to serve on various regional and international Anglican and ecumenical bodies.

Sadly, Bishop Marcus died from cancer a year later. Thereafter she worked as Research Adviser to successive Archbishops of Cape Town, and during this time completed a doctorate in philosophy of religion and public theology, entitled Doing God in Public. This offers an Anglican interpretation of philosopher Alasdair MacIntyre’s tradition-based reasoning as a Christian praxis for constructive engagement in a pluralist world. She is a provincial Canon of the Anglican Church of Southern Africa.

In 2011 she married a fellow Welsh exile working in South Africa, Peter Evans. They returned to Wales in 2013 when she became priest in Charge of Cardiff’s city parish of St John the Baptist. She has since served on the Ecclesiastical Committee supporting St John Ambulance Cymru Wales, for which St John’s is the Welsh Priory’s Mother Church, and was made an Officer of the Order of St John in 2015.

Her appointment as Dean of St Davids was announced in November 2017 and she was collated and installed in May 2018.

Dean Sarah was a member of the Church in Wales Standing Doctrinal Commission from 2014 through to the publication of Faithful Stewards, endorsed by the Governing Body in 2021, to which she contributed a chapter on the Diaconate. She is also a member of the Faith and Order Group of the Covenanted Churches, and Cytûn’s Ecumenical and Inter-faith Officers Network.

She has been a member of the Inter Anglican Standing Commission on Unity, Faith and Order since its establishment in 2009, convening its ecumenical work. She is also a member of the International Commission for Anglican Orthodox dialogue, has been a consultant to the Church of England on Anglican/Pentecostal relations, and represented the Anglican Communion in its high-level dialogue with Roman Catholics, Lutherans, Methodists and Reformed on how to build on the Joint Declaration on the Doctrine of Justification.

Dean Sarah publishes widely on issues of Anglican identity, polity and ecclesiology, including within ecumenical contexts. She compiled and edited The Vision Before Us, the 2009 Report of the decade of work of the Inter Anglican Standing Commission on Ecumenical Relations, which remains the Anglican Communion’s ecumenical reference guide. She contributed the chapter ‘Episcope and Leadership’ to the Oxford Handbook of Anglican Studies (OUP, 2015). She contributes regularly to the Church of England’s annual Reflections on Daily Prayer.

Drawing on the experience of her first husband’s early death, Dean Sarah also writes and speaks about end of life issues; and on broader spiritual issues, now particularly including pilgrimage. She is a trained spiritual director in the Ignatian tradition, and was formerly Chair of the Llandaff Diocesan Spirituality Group.

How best to speak of the things of God in the language of the world, and promote the Christian faith in the public square – building on her doctoral work – remain of academic and more general interest. Most recently, Dean Sarah has published reflections on Christian perspectives on Brexit and the questions it raises, including its impact on Wales; and has also addressed the Church of England House of Bishops, and spoken at Lambeth Palace seminars on this.

Dean Sarah broadcasts regularly with BBC Radio Wales and elsewhere both on current affairs and religious questions, and is a frequent contributor to Radio 4’s Prayer for the Day and Sunday Worship. She led St Davids Cathedral as the anchor of the BBC1 Sunday Worship programmes run during the 2020 lockdown.

Dean Sarah is also a published poet, and the proud owner of Scottie Cora and Cockerpoo Daisy. 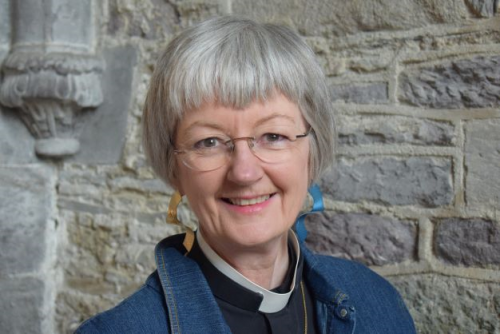