ST DAVIDS CATHEDRAL IS CURRENTLY ONLY OPEN FOR PRAYER AND PRIVATE REFLECTION UNTIL FURTHER NOTICE
WE ARE NOT OPEN FOR GENERAL VISITING, in line with Welsh Government regulations
We are open Wed-Sat for prayer and reflection: 10am - 3pm. Our Sunday Eucharist at 11.15am will be streamed and available via Facebook and Youtube.
Everyone entering the Cathedral must wear face-masks, unless exempt 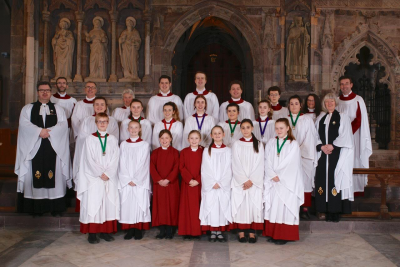 The earliest reference to choristers at St Davids Cathedral was in 1132. Thomas Tomkins was born in St Davids in 1572 and he became a chorister in the cathedral while his father was the Organist and Master of the Choristers.

The present Cathedral Choir is unique in the UK in that its top line consists of girls aged 8-18. The lay clerks of the choir work locally in a variety of occupations. The choir sings at four services each week and has recorded several CDs and broadcast many times on BBC radio and television. In the last ten years the choir has toured widely in Europe, Australia and the USA (three times).

The choir plays a major part in the Cathedral's Festival and has performed with Florilegium, Charivari Agreable, the Corelli Orchestra and Onyx Brass and has given premieres of music by Malcom Archer, Mark Blatchly, David Briggs, Neil Cox, Howard Goodall, Alun Hoddinott, Francis Jackson, Alexander L'Estrange and Matthew Martin. The choir maintains a high profile and has recently performed with the BBC National Orchestra of Wales in St Davids Hall, Cardiff and recorded three programmes for BBC Songs of Praise. This summer the choir will tour in Italy and perform in the City of London Festival. Their latest CD 'The Feast of St David' was released by Priory Records in May.

In addition to the Cathedral Choir, there is a separate Boys' Choir. The choir sings Evensong on Tuesdays and Fridays (fortnightly with the lay clerks). Members of the choir are drawn from across the county. The choir has sung at cathedrals in the UK and Ireland and recently recorded its first CD.

The Junior Choir is open to boys and girls in Years 3-6 and currently has 25 singers from the primary schools of St Davids, Croesgoch, Roch and Solva. The choir rehearses at 3.45pm on Fridays and sings two services in the cathedral each term. Many of its members go on to join the Cathedral Choir or Boys' Choir.

In 1991 the Cathedral Singers, an adult choir of mixed voices, was established. The choir sings evensong every fortnight and often deputises for the cathedral choir during half term holidays. The choir has also enjoyed singing weeks in Exeter and Hereford Cathedrals and Yorkshire. If you are interested in joining the Cathedral Singers please contact: