The Cathedral will be closed between 11:15am and 1.30pm for a wedding on Saturday 13th August.

St Davids Cathedral Choir is on holiday until early September.  There will be occasional choral services from visiting choirs

The Summer Concerts series takes place on Wednesdays at 7.30pm: tickets £8 on the door.

Face-coverings are no longer mandatory in the Cathedral, but you are welcome to wear them if that makes you feel comfortable.

Dogs are very welcome in the Cathedral grounds, but only assistance dogs are allowed in the building. 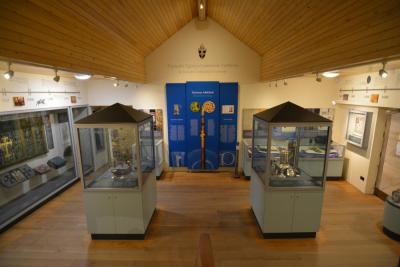 The Cathedral Treasury opened in Spring 2006 to provide a safe home for treasures which tell the story of Christian worship and scholarship at St Davids that began 1,500 years ago and which continues to the present day.

Treasures of the Bishops

A variety of objects, reflecting the power and status of the Bishops of St Davids, were discovered in the Cathedral graves of four early Bishops.  Amongst these were rings which are now on display in the Treasury - rings decorated with amethysts which belonged to Bishop Beck and Bishop Carew and a plain gold ring with five notches on it, perhaps intended to remind the wearer of the five wounds of Christ.  Silver Chalices on show were also buried with Bishops Beck and Carew and date back to the 13th century.

The croziers or Bishops’ staffs of office are perhaps the greatest of the treasures on display.  They are made of copper and gilded and would have been carried by bishops during services 800 years ago.  One found in the grave of Bishop Gower is much plainer than the others on display, made of latten, an alloy of copper, zinc, lead and tin, and was specifically made to be buried with the bishop.  Medieval coins were found in the grave of Bishop Beck.  They date from the reign of King Edward III (1327-1377).

One of the 12th Century croziers was on laon to the British Musem exhibition "Thomas Becket. Murder and the Making of a Saint" between April 2021 and September 2021.  The crozier was returned in September 2021 and is now again on public display in St Davids Cathedral Treasury.

Through much of the Tudor and Stuart period church treasures in England and Wales were destroyed as a result of the oscillation between the church’s mediaeval Catholic heritage and contemporary Reformed Protestantism.  After the restoration of Charles II, new pieces, to be used in services, had to be made.

Amongst items on display are:

- a small silver chalice made in 1618 of the sort of simple design popular in the Elizabethan period,

- a silver plate for a communion set made in 1678 - on the rim of which is inscribed Ecclesis Cathedralis Menevensis - the Cathedral Church of Menevia (St Davids), - nineteenth century chalices decorated with amethysts and garnets

- Maundy Money coins which were presented by H.M. Queen Elizabeth II to citizens of St Davids on Maundy Thursday 1982.  British sovereigns traditionally washed the feet of the poor on this Thursday before Easter, a practice that was replaced by the giving of money during the reign of James II (1685-1689).

The Cathedral's treasures of worship go beyond its collection of precious objects.  Also on display are altar frontals used to dress the altar for worship (usually made of silk or velvet with beautiful embroidery, which quite often uses gold or silver thread) and Kneelers which are heavy cushions that are placed in the pews so that worshipers may kneel on them to pray.  Most of the kneelers were embroidered for use in St Davids Cathedral by the Cathedral's Embroidery Guild.

In the corner display case is a cope with gloves and cushion, worn by Bishop Jenkinson, Bishop of St Davids who attended the Coronation of Queen Victoria in 1838, and took part in the ceremony by the reading the litany.

Throughout St Davids Cathedral are magnificent examples of wood carving - a closer look reveals faces, angels, fruit and animals amongst the elaborate carvings.  In the Treasury are pieces of carved oak including an angel's head from an organ case installed in 1705.  The craftsmanship makes a huge contribution to the beauty of the Cathedral. These include 16th-century wooden ceilings and stalls and carvings on the organ.  The building itself is a glorious tribute to God. Saint Davids is home to magnificent architecture and craftsmanship, examples of which you will see all around you today. 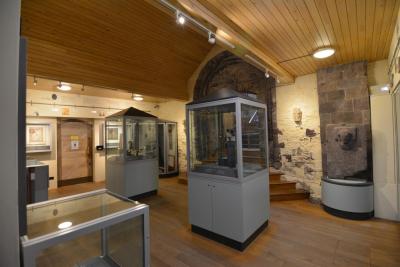 St Davids has a tradition of scholarship that can be traced back to its very beginnings.  When King Alfred needed help to rebuild the intellectual life of Wessex after it had been decimated by the Vikings, he called upon Asser, the Bishop of St Davids, to help him.  This reputation for scholarship continues today and is embodied in the Cathedral Library.

The origins of the Library lie in the monastery of Saint David that stood here before the Cathedral was built.  It has a medieval scriptorium where monks wrote and illustrated manuscripts and documents. Despite much of the collection being destroyed during the turbulent years of the 16th and 17th centuries, the Library contains some truly remarkable treasures.  Some of these are on show in the Treasury and you can see many more if you visit the Library where the oldest book dates back to 1505.  The Library's collection covers a wide variety of subjects including theology, Bible studies, geography, herbals, history, mathematics, science and Wales.  Amongst its treasures are a leaf from a 12th-century manuscript, copies of the 1620 edition of the Welsh Bible and a first edition map of Wales by John Speed, 1610, the earliest detailed pictorial street map in existence of the major towns of Wales.