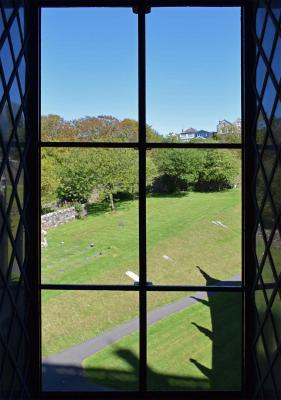 The Library has substantial collections belonging to Deans, Bishops and Clergy dating back to the 16th century. Books and other appropriate materials are constantly being added. It is an eclectic collection with subjects including Christianity in Wales, the Reformation, St Davids, Church in Wales history, early scientific and mathematical works, early maps and atlases.

There are a range of early and more recent Bibles and Prayer Books in Welsh, English and other languages. Books are in several contemporary and past languages including Anglo-Saxon, Arabic, Breton, Danish, English, Erse (Irish), Esperanto, French, German, Greek, Hebrew, Italian, Japanese, Latin, Persian, Romany and, of course, Welsh.

The Library holds copies of St Davids Parish Registers of Christenings, Marriages and Burials since 1724.

Those interested in undertaking research in the Cathedral Library are very welcome.  Email enquiries should be sent  to Library@stdavidscathedral.org.uk with details of the research and any supervisers or sponsors.

The building in which the Library is housed is as interesting as the Collection. The building itself is older than any of the books. 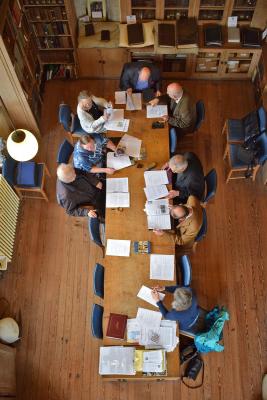 The current location of the Library within the Cathedral is on the first and second floors above the Chapel of St Thomas  Becket on the north side of the Cathedral. This three storey part of the building dates from the 14th Century. The entrance door is up a short flight of wooden steps, near the two icons of St David’s mother St Non and St Justinian at the rear of the restored Shrine of St David.  The two floors were restored and refitted as the Library in the 1950s. It had previously been the Chapter House and the Treasury and in the 18th and 19th Centuries was used as the Cathedral Grammar School.

There is a  medieval fireplace with lamp stands, two stone window seats with stone canopies on the north side of the building and a piscina for washing hands.

The St Davids Cathedral Library Collection dates back to the 16th Century and contains many Rare Books in English, Welsh and other languages. The Collection includes some of the first Bibles produced in Welsh as well as early Bibles in English. Many books in the Collection reflect the theological and political turmoil of the 16th and 17th Centuries Reformation during the Tudor and Stuart period in Britain.

It is recorded that many of the older manuscripts in the Cathedral were “cancelled and torne up” in the early years in the Reformation in the 16th Century as representations of the “old church”. Other manuscript books were dispersed at the time to the new colleges in Oxford and Cambridge. 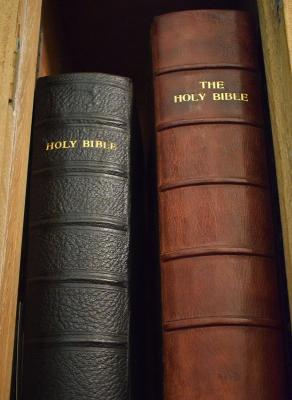 The 1620 Welsh Bible was the first widely available Welsh language Bible. A translation of the New Testament into Welsh from the original Greek was first produced in 1567 by William Salesbury. In this translation Richard Davies, Bishop of St Davids 1561–1582, translated 1 Timothy, Hebrews, James 1, Peter 2. Thomas Huet, St Davids Precentor 1560-1591, also translated the Books of Revelations. The Salesbury translation was further revised by Bishop William Morgan, and after his death, completed by Bishop Richard Parry, and published initially in 1588 and, after further editing, in 1620.

There is also a collection of Greek and Roman classics bequeathed by Dean Allen, Dean of St Davids 1878-1897.

It is an eclectic collection and includes books in: science, mathematics, physics, medicine, herbals (medicinal use of plants), as well as theology, Cathedral history, church history, local history, Welsh history.

The oldest complete book in the Library is the 1504 Provinciale seu Constitutiones Angli. This book in Latin on Church Law was written by William Lyndwode, Bishop of St Davids 1442-1447.

The Cathedral Library is open to the public on Monday and Friday afternoons. For enquiries on other times of opening, and research access to the Library collection, please email: Library@stdavidscathedral.org.uk